In Star Wars: Galaxy of Heroes, players can fight with their favourite iconic heroes to master the galaxy. The game allows players to make their own decision about team members as team leaders, customizing their groups with characters from a variety of big-name masterpieces, including Star Wars. Players can lead their squads in the war, fight against enemies, and upgrade squad characters

1. In the game, players will be the decision-makers and team leaders. They are responsible for building an ultimate team by selecting from a group of heroes from the universe of Star Wars. You are supposed to take tactic actions and choose suitable and qualified team members to form an invincible squad.

2. Players can challenge themselves to be the boss of the whole galaxy by defeating enemies. Through the fighting, you can make your way to the top to dominate the universe. The skills and power of your selected characters can be improved throughout the gameplay to guarantee victory during every battle. You can compete with other players in a different game mode of Squad Tournaments, Cantina Battles, and so on.

3. Players can select capable characters as your team members by making wise choices and equipping them with ultimate weapons.

1. Players can participate in ship battles while collecting starships in order to build their own fleets. By gathering special materials for the upgrade of characters, you can empower your team in a substantial way.

2. Players can build their own faction and attack bosses in the game.

1. Become the team leader and decision-maker

Players will play the role of a team leader and decision-maker to build an invincible team formed by famous and iconic heroes from Star Wars.

Players should make tactical decisions to empower their team in order to beat enemies, fight back attacks, and dominate the universe.

Throughout the game, players can unlock various elements to equip their heroes.

The game tries to convince players to spend plenty of money. Meanwhile, even players invest much money in the game, it doesn’t guarantee victory in the game.

Though the game is quite interesting to play, if players don’t do daily tasks with great patience, it might be extremely hard for them to get onto the top rank and unlock new features in the game.

The game has stopped releasing new content that is free and the only new elements are charged with certain prices.

The game used to be user-friendly but now it has been riddled with pop-ups, making players feel that they are visiting some illegal sites.

Star Wars: Galaxy of Heroes is super fun for Star Wars series lovers. The game gives players a lot of freedom to make decisions and strategies on their own, offering the chance to select members of the team from elites of the Star Wars series. The major task for players to fulfil is to lead the team to fight against others so as to master the galaxy at the end. The game is interesting and challenging at the same time. It is recommended to those who have plenty of time to kill and much money to spend, or else it might be very hard for them to achieve good performance in the game. Despite the drawbacks mentioned above, the game is worth a try. 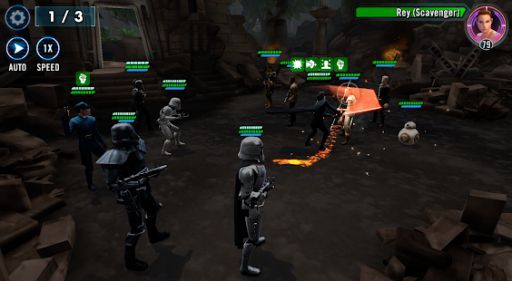 Get Star Wars: Galaxy of Heroes

Disclaimer: The download address of Star Wars: Galaxy of Heroes game is from the official application market of the iOS App Store and Google Play. It has been checked by didagame and will not contain viruses and malware.